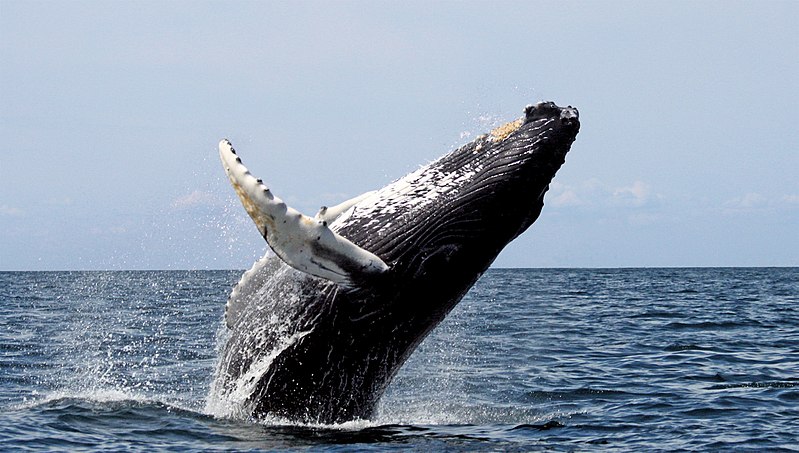 In the midst of a global pandemic, it’s hard to see how any good can come from this tragedy. However, because people are traveling and polluting less, the environment is getting a well-deserved break.

I’ve been seeing a lot of posts on social media lately, reporting wild goats wandering down from the hills in Wales and into people’s yards, and drastically clearer skies in Los Angeles. I wanted to look deeper into how the ocean is reacting to this slowing of human activity, and see if this gives us insight as to how we can restore our ocean to health.

The Covid-19 pandemic has put life as we know it on hold. Flights have been canceled and many people are working from home instead of driving their cars to work. The result is that a lot less carbon dioxide (CO2 ) is being put into the atmosphere. According to the airline company Blue Sky, the average plane produces more than 53 pounds of carbon dioxide per mile. Now that very few people are traveling in planes, think of how much less CO2 is being emitted.

You may be wondering, how does a decreased amount of carbon dioxide in the atmosphere affect the ocean? Well, due to the ocean carbon cycle, when there is less CO2 in the atmosphere, less CO2 is sucked into the ocean. According to the National Oceanic and Atmospheric Administration, the ocean holds fifty times more carbon than the atmosphere. When fossil fuels are burned, carbon is released, and much of those fossil fuels end up in the ocean. This makes the ocean’s pH (how acidic the water is) and temperature rise, and causes a process called ocean acidification. Ocean acidification makes it more difficult for certain animals such as corals and mollusks to build their shells, and is a threat to most marine species.

Because less fossil fuels are being burned right now, air pollution is going down. For example, according to Lauri Myllyvirta, a scientist at the Helsinki-based Centre for Research on Energy and Clean Air, in India, one of the countries with the most polluted air on earth, people who have never been able to see the Himalayas from their houses can see them clearly. According to National Geographic, the amount of nitrogen dioxide (a harmful gas produced by burning fossil fuels) in the air in India has been reduced by over seventy percent.

This phenomenon is not only happening in India. In Los Angeles, nitrogen dioxide levels have decreased by 33 percent. In New York, they have fallen by 22 percent. In the Northeast U.S., NASA estimated that the nitrogen dioxide levels in the air have dropped by thirty percent. The speed at which air pollution is plummeting during the pandemic may give us insight into how dramatic reductions in pollution are possible in the future.

In Thailand, International flights have been canceled and citizens are being encouraged to stay home. Beaches that were once crowded with tourists are deserted. Since November, scientists in Thailand have found eleven leatherback turtle clutches. According to Kongkiat Kittiwatanawong, the director of the Phuket Marine Biological Center, this is the most clutches reported in twenty years. Leatherbacks are the largest species of turtle and can sometimes grow to seven feet long. They live up to 45 years in the wild, and though they are thought to occupy the widest range of habitat of any reptile (they live in every ocean except the Arctic and the Antarctic), the leatherback population has been decreasing in recent years, especially in the Pacific where Thailand is located. The main threats to leatherback turtles include bycatch (the accidental fishing of marine wildlife not intended to be caught), disruption of clutches, and unintentional consumption of plastic. The leatherback turtles’ main food source is jellyfish, which can appear a lot like plastic bags floating in the ocean. When sea animals eat plastic, it harms their digestive systems, and over time, if they consume enough, it eventually kills them.

Beaches in Thailand aren’t the only ones seeing a sudden increase in leatherback turtle clutches. In Florida on Juno Beach, scientists have already counted 76 clutches of eggs since the start of the nesting season, a drastic increase from last year.

Clearly, the sudden increase of leatherback turtle clutches is very welcome news. Though one larger generation of leatherbacks won’t necessarily make much of a difference in the long run, this shows us that closing certain beaches, even for a short amount of time, may help restore the leatherback population.

Although the viral pictures of dolphins swimming in Venice canals have been debunked, the absence of boats in the canals has been leading to clearer water, revealing schools of fish and other marine life. According to Matteo Bisol, a Venice restaurant owner and environmental activist, “[I]t is not surprising there are fish in the canals of Venice. If there were not, then we should all be worried, as the lagoon here is a fragile ecosystem. People need to realise that if we control and cut down boat traffic in Venice and its lagoon then we could all discover a unique biosphere.”

Fewer boats in the water benefit more than fish in the Venice canals. Though scientists don’t have conclusive results yet, it is thought that the decrease in underwater noise pollution may benefit whale populations. Researchers do know that when there is more noise from sea vessels, whales off the coast of Alaska tend to call and communicate less. Michelle Fournet, a marine acoustician, told the Guardian, “[W]hat we might see is an opportunity for whales to have more conversation and to have more complex conversation.”

Humpback whales and their calves in Hawaii are also enjoying the absence of boats. On March 20, the state Department of Natural Resources’ Division of Boating and Ocean Recreation banned all boats from sailing around the island. This includes whale watching cruises and fishermen, the main disturbances to the whales. According to Marc Lammers, a research coordinator for the Hawaiian Islands Humpback Whale National Marine Sanctuary, “Not having humans either trying to view them or, in some cases, interact with them will be a huge benefit for the mother, whose priority is to protect and nurse her calf so it can be strong enough to make the trip to Alaska. It allows her to conserve her energy and transfer that energy to her calf in peace, without having to respond to stand-up paddlers and five or six boats approaching at a time.”

On April second, a humpback whale and her calf were spotted close to the beach in Lahaina Small Boat Harbor. It is uncommon behavior for humpbacks to venture so close to shore, and scientists wonder what other changes in whale behaviors we might see if boating bans remain in place.

Of course I don’t mean to make light of the awful situation the pandemic has put us in, but these temporary positive improvements among marine life are giving us insight about how to heal our polluted Earth. I expect the pollution levels to rise and leatherback turtle populations to fall again after quarantines are lifted if we don’t make changes from how we were living before. If we were able to create and enforce bans on boating in certain parts of the ocean, we may see whale and other marine populations thriving once more. If we limited the burning of fossil fuels, ocean acidification would decrease. These changes wouldn’t solve all the problems our ocean faces, but they would help a great deal. It took a global pandemic to slow our consumption of fossil fuels and to clear up the water in the Venice canals. If only we could institute some of these changes for a long period of time, our Earth might one day become as clean as it once was.

Maya Chastang is an eighth grade student at Summit Middle School in Boulder, Colorado. She is passionate about marine biology and ocean conservation. She enjoys writing, reading, playing volleyball, basketball, and the piano.