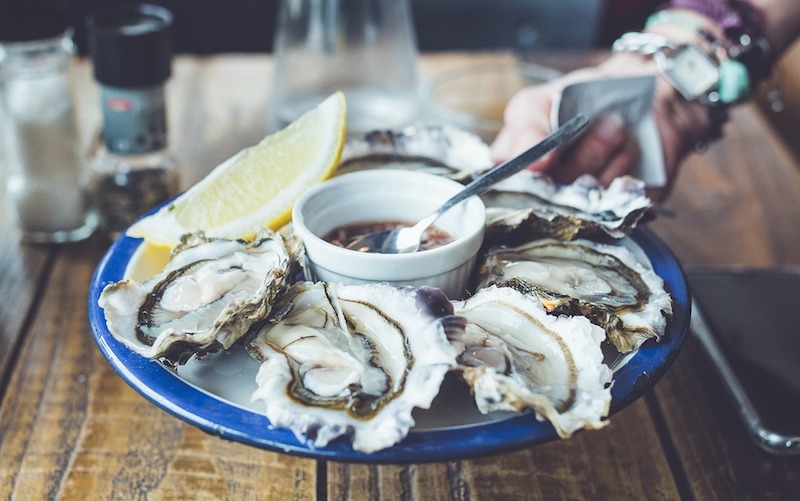 Guest blog post by Alex Dunbar, IOC intern and student at the University of North Carolina at Chapel Hill majoring in Business and Environmental Science

However, these shellfish are worth so much more to us and our environment when they stay in the water. The unique structure of shellfish reefs protect beaches and their residents against storm surges that threaten extreme flooding. Shellfish are critical to filtering water in our ocean and bays, with a single oyster in the Chesapeake Bay filtering up to 4.5 gallons of seawater every day. Shellfish also sequester carbon and remove nitrogen from the water, which reduces ocean acidity and improves our climate. In Florida alone, the introduction of 136 million clams filtered 544 million gallons of seawater and removed 760,000 pounds of carbon and 25,000 pounds of nitrogen. These ecosystem services are estimated to be worth $99,000 in economic benefits. Shellfish are more than just a tasty seafood option; they are incredibly valuable to ecosystems and offer a solution to the climate crisis. However, this solution is in turn being destroyed by the effects of climate change, the very issue it could help mitigate.

In early July in the Pacific Northwest and Canada, there was a severe heatwave, with temperatures reaching 121 degrees Fahrenheit. What resulted was the death of many selfish and sea animals. Scientific American estimates that in the Pacific Northwest alone, over one billion sea creatures died as a result of the heatwave. The first major die off event was discovered by marine ecologist Alyssa Gehman in Vancouver on her way to a morning swim. The marine ecologist could smell “cooking shellfish” as she approached the ocean, but it wasn't until she looked over onto the beach that she saw millions of dead mussels and clams scattered along the shoreline. Alyssa was terrified by what she saw, explaining that she had never seen this “magnitude of mortality.”

The crushing heat - which is most likely a result of climate change - is to blame for this massive death toll, but ocean acidification and over-harvesting also put these important creatures at risk. Ocean acidification occurs when the ocean dissolves too much carbon dioxide, which lowers the pH of the water, killing shellfish larvae by the millions. Areas like the Chesapeake Bay are also often over-harvested, leaving very few shellfish to perform crucial tasks like filtering the water. To combat these issues, the United States needs to reduce carbon emissions across the country. Coastal states need to set regulations on shellfish harvesting to make it more sustainable and increase the number of shellfish in the ocean. The Ocean-Based Climate Solutions Act, introduced by Representative Raul Grijalva of Arizona, offers a blueprint for how ocean-based climate solutions can reduce carbon emissions and the impacts of climate change, but it needs support from other legislators and the public to become law. Reach out to your legislators and ask them to support the Ocean-Based Climate Solutions Act.

It is important going forward that we take full advantage of what shellfish can do for us by doing our best to protect them.