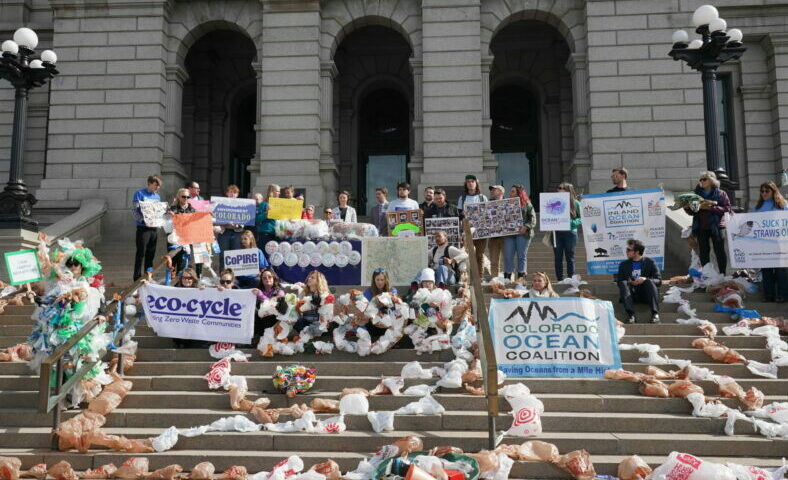 This year Colorado is taking steps to reduce plastic pollution in the state through three legislative measures. First, SB 10 would have overturned a plastic preemption measure—essentially a ban on bans—that barred local governments and communities from creating their own bans on plastic items or regulating any plastic products within their jurisdiction. The bill was heard in the Local Government Committee on February 4th. Melissa, the Inland Ocean Coalition’s (IOC’s) new Community Engagement Manager, provided testimony highlighting the importance of reducing plastic here in Colorado, and that as a headwaters state, this would send positive ripple effects downstream to the ocean.

The IOC carried out a pilot study in 2017 with scientists from the Shaw Institute which found evidence of microplastics in high alpine mountain tributaries above 11,000 feet—what we would generally think of as pristine ecosystems. This highlights that plastic pollution is not a big city issue or far away problem: It’s something that affects all of us, from the mountains to the coasts.

Unfortunately, the bill, sponsored by Senator Kerry Donovan of District 5 in Eagle, Delta, and Pitkin counties, was voted down 3-2. This means it did not pass through committee to the Senate floor. Telluride Mayor DeLanie Young said, “It’s extremely disappointing. Our community has been patiently waiting…for elected officials to take action on this erroneously outdated language.”

However, there are still two upcoming bills that could still help reduce plastic production, use, and pollution here in Colorado. HB1162 would eliminate polystyrene (aka Styrofoam) use and and HB1163 would implement a single-use plastic bag ban for the entire state. These bills will be heard by the Energy & Environment Committee on February 24th. We plan to attend and again testify to the harmful effects of polystyrene and single-use plastic on our land, waterways, wildlife, climate, human health, and ocean. We anticipate that these bills will pass through committee and be heard by the whole floor in the upcoming months.

Stay tuned for updates! If you’d like to support these bills you can: