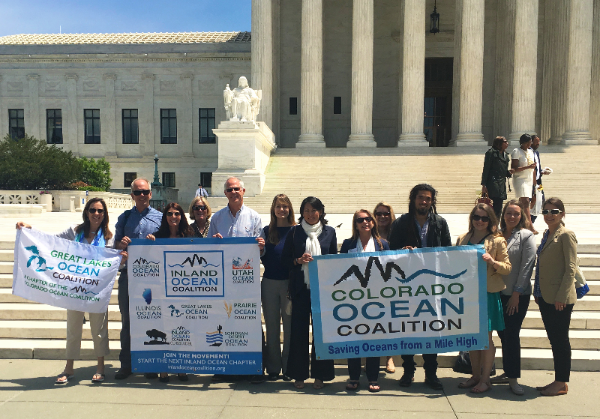 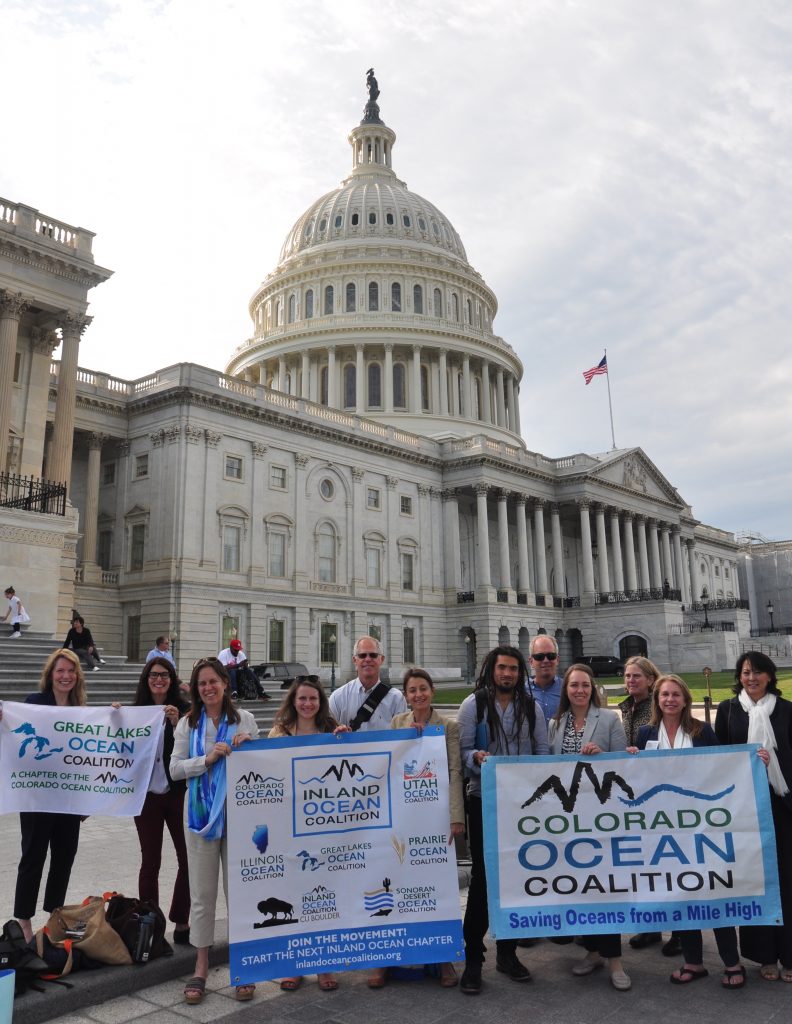 A key component of the Blue Vision Summit in Washington D.C. is Hill Day where participants talk to their federal Senators and Representatives. The Inland Ocean Coalition showed up in force with a delegation of fourteen. The group consisted of Colorado residents as well as chapter leads and members from around the country and a resident of Canada. As an inland delegation, we began the day on the Senatorial side of the Capitol and ended the day in the House buildings.

We met with staff members from the following offices: Cory Gardner (R-CO), John McCain (R-AZ), Michael Bennet (D-CO), Gary Peters (D-MI), Scott Tipton (R-CO), Jared Polis (D-CO), Ed Perlmutter (D-CO), Dana DeGette (D-CO), and Doug Lamborne (R-CO). The meeting agenda’s varied based on the audience, but in general, we discussed: plastic pollution, offshore oil drilling, joining the Ocean Caucus, the threatened Antiquities Act and protecting National Marine Sanctuaries. We addressed specific house and senate bills depending on whether we were speaking with Senators or Representatives. With a majority of legislative aids, we covered the Save Our Seas Act, the Trash Reduction Act, and/or the proposed drilling in the Arctic and Atlantic oceans. 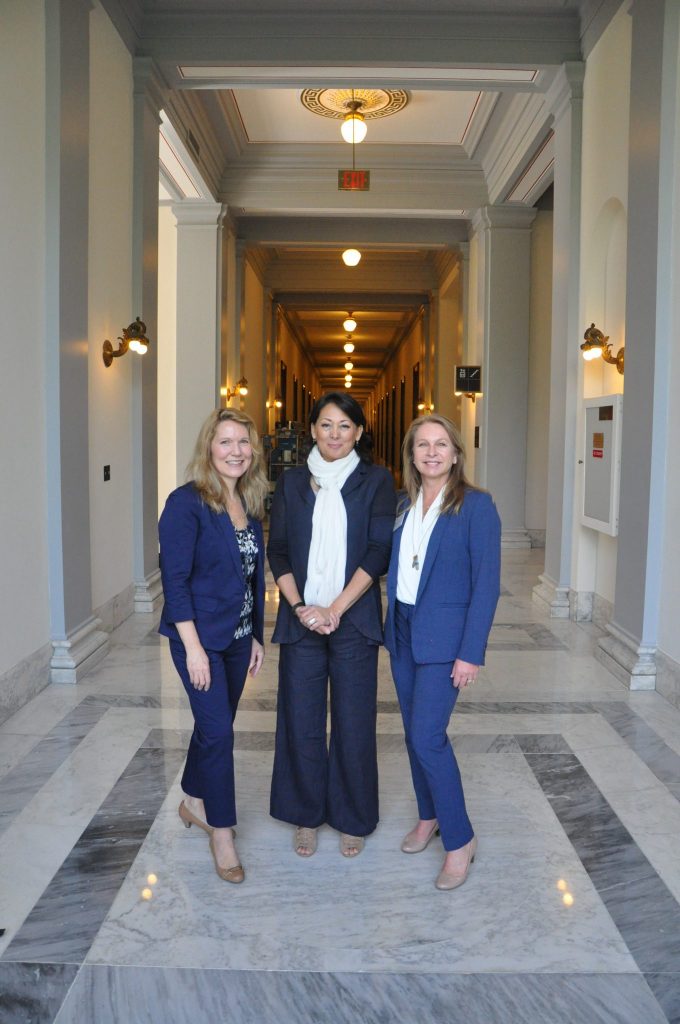 The Save our Seas Act was introduced by Senator Dan Sullivan (R-AK). It is a bill to reauthorize and amend the Marine Debris Act in order to promote international action to reduce marine debris and encourage the leadership to interact internationally to address plastic pollution. The examination of the Monuments under the Antiquities Act, initiated by President Trump, endangers many marine monuments: The Marianas Trench, Northeast Canyons and Seamounts, Pacific Remote Islands, Papahanaumokuakea, and Rose Atoll. The delegation asked all members of Congress with whom we spoke to vote against the de-designation of the ocean monuments.

The Trash Reduction Act is currently in the House and involves “carry-out” bags. The federal government has begun to enforce a ban on bans, taking away the ability of states to ban plastic bags. In our meetings, the delegation asked that representatives give the power back to the people and allow the decision to be made on a local level.

In specific meetings, the delegation did not discuss offshore drilling because research into previous voting records indicated that it would be pointless. With this approach, our meetings were productive, civil, and encouraging.

Senator Cory Gardner was not 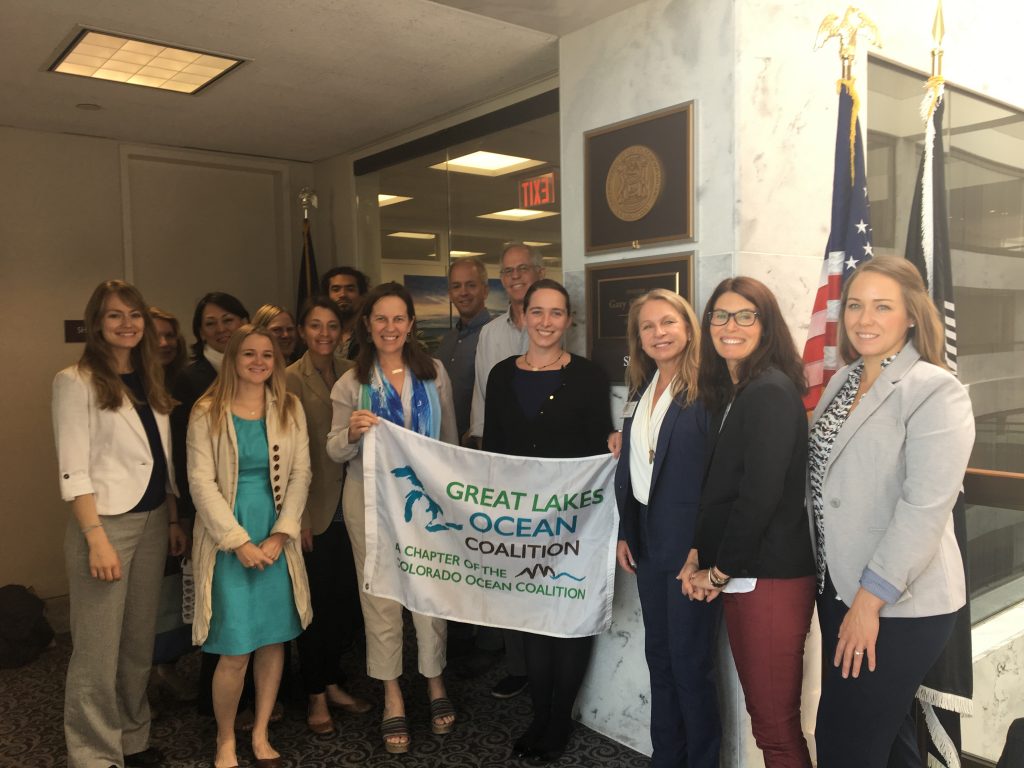 willing to join the Ocean Caucus, is supportive of offshore drilling, but wanted to learn more about the Save Our Seas Act, and said it had been brought to their attention before. The aid in Senator John McCain’s office took notes on the ocean caucus, may be in support of voting against offshore drilling for National Security reasons, and was interested in the Save Our Seas Act. The aid for Senator Michael Bennet listened intently, and shared our concerns, and requested that the Inland Ocean Coalition stay in touch. Senator Gary Peters from Michigan is a member of the Ocean Caucus, is co-sponsoring the Save Our Seas Act, is against offshore drilling, is interested in learning more about plastics, and is aware of the importance of inland communities in ocean conservation. With Representative Scott Tipton’s aid, the coalition focused mainly on plastics, and there was little interest; he did, however, take notes because of the bipartisan nature of the Save Our Seas Act, and suggested that the Inland Ocean Coalition begin to lobby our states for the Trash Reduction Act. Representative Jared Polis is a member of the Ocean Caucus, is against offshore drilling, was interested in creating a house version of the Save Our Seas Act, but needs a Republican to cosponsor the bill. He is an ocean advocate and an ocean champion! Representative Ed Perlmutter wants to shrink his caucus list so he will not be joining Ocean Caucus. His voting record, however, is aligned with the values of the delegation, and he requested to be kept apprised of the Inland Ocean Coalition’s actio 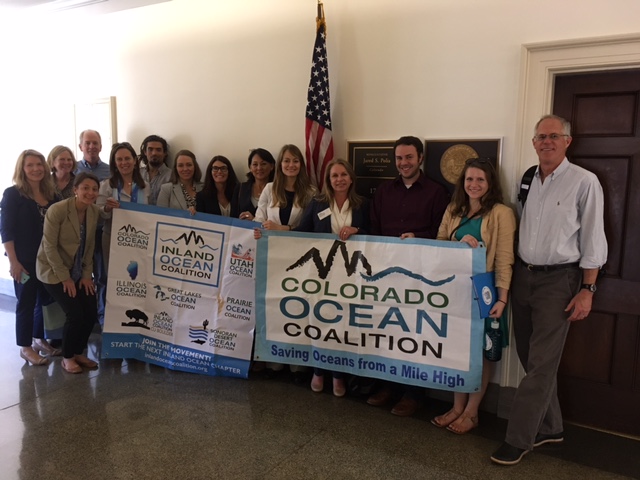 ns going forward and to be a newsletter recipient. Representative Dana Dugette is completely aligned with the values of the Inland Ocean Coalition and wants to join the Ocean Caucus. The last meeting of the day was with a legislative aid of Representative Doug Lamborn. The delegation only discussed plastics and preserving the monuments currently under review. We had a productive discussion regarding how to incentivize people to reduce their plastic bag use. The aid was more aligned with offering rewards for bringing one’s own bag, rather than penalizing plastic bag use in the form of a tax. He was also in support of reevaluating the preservation of monuments.

Overall it was a fun, informative, and energizing day. Given the current political climate, it is even more important that coalitions like ours stand up and make sure we are heard. It was a great reminder that the United States is a democracy and individuals matter. The ocean is rising, but so are we.